Hillbrow is viewed as one of Johannesburg’s  most dangerous suburbs. Combine that with alcohol and the parties that go hand in hand with New Years Eve and you have a very volatile situation. Therefore it is no surprise that the South African Police opt for the Nyala as transport during this time. The Nyala is an armoured personnel carrier.

Nelius and I picked up Nickolaus from the SABC after he finished doing his radio show on SAFM. We went for McDonalds – dinner of champions – and then through to the  Hillbrow Police Station. We arrived at about 8pm, unfortunately we just missed the first ride in, but midnight was still far, far away.

Standing around and talking to some of the cops, some expressed concern that we weren’t wearing bulletproof vests and helmets (I was wearing a helmet, because I borrowed a GoPro camera from a friend, so I was fine). We even went over to some Metro Police officers who were busy braaiing on the back of their truck and I jokingly asked how much for a boerie. They replied that they brought their own meat, because the food you buy in Hillbrow was unreliable and that the night is still long…

We were also talking about the weather and how beautiful night it had become… Barely half an hour later rain was pouring down, which caused my friends barring me of discussing the weather again that night. 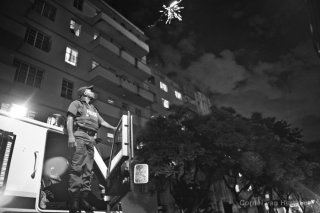 It was during this quick downpour that Nickolaus, Nelius and I was fortunate to share a bus stop terminal with a Hillbrow resident who was busy sniffing some glue out of a carton container, right opposite the police station. This was just a harsh reminder of how different things were here. 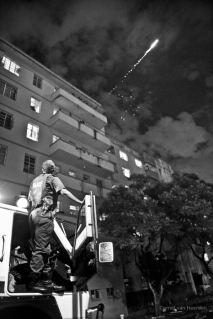 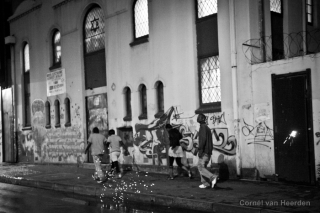 Our Nyala arrived 21h30-ish and got us very excited. By this time we’d heard a lot of fireworks go off. – I wondered if it would be easy to distinguish it from the sound of bullets. 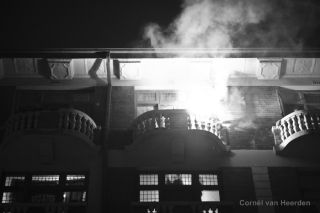 It was nearly 22h30 when we first set foot in Hillbrow. We drove past a random naked guy standing outside a block of flats. Unfortunately we couldn’t and didn’t stop there, so I couldn’t ask him what his story was, but it was just such a wonderfully weird welcome to Hillbrow. 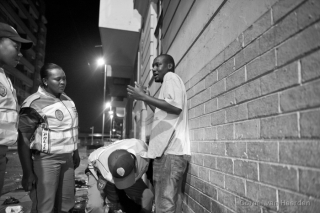 We cruised around for an hour or so. When we got back the Emergency Medical Services (EMS) people, their Mfezi – also an armoured personnel carrier that is adapted for ambulance work – had a puncture and they were trying to fix it. This proved to be a rigorous task, because when we left at around 2 o’clock, they still were still trying to get the deflated wheel off. 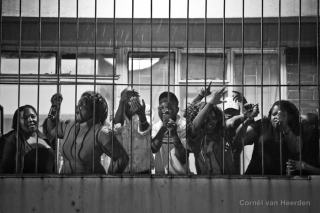 With half an hour to go to 2012, everything was relatively quiet with no violence reported and certainly no hostility against the cops or us. 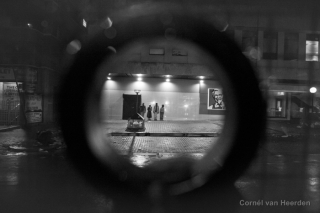 At exactly 24h00 we did a mini-countdown in the Nyala, wished each other a happy new year and then got back to work. Immediately we got some flying bottles directed at us. A bottle of beer hit the inside of the Nyala’s door and splashed me full of beer. It was then that the cops asked us to close the doors on both sides. It was a good thing, because we were peppered with glass bottles. 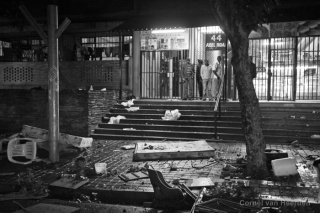 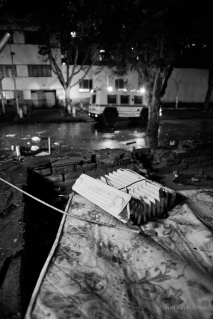 This lasted for about a half an hour. Then it went relatively quiet and either the parties moved inside, people passed out or they went to sleep.

All in all it was a quiet and uneventful evening. Still an awesome experience which I enjoyed. 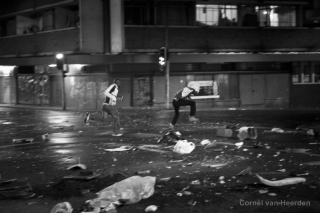 Obviously we finished the night off by going to Catz Pajamas for a beer at just after two… Because our last beer, was drank last year.

2 Replies to “Into the New Year in Hillbrow”