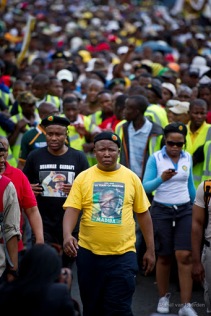 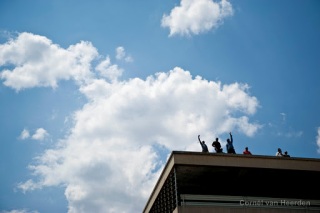 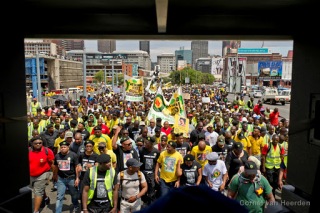 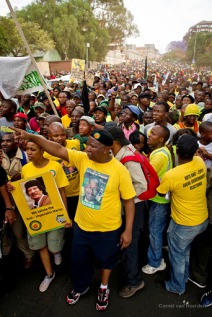 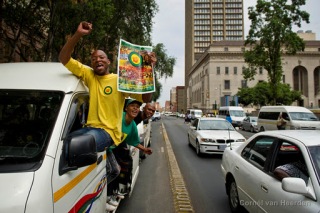 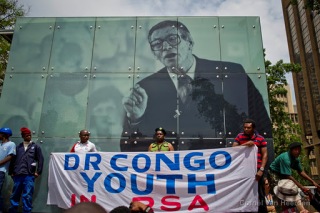 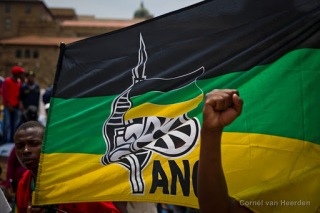 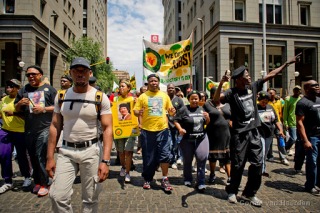 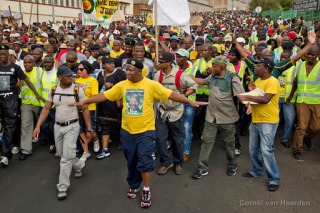 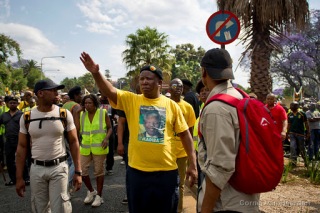 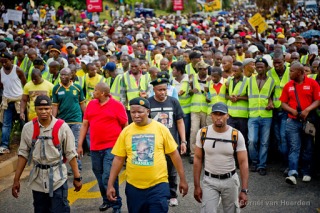 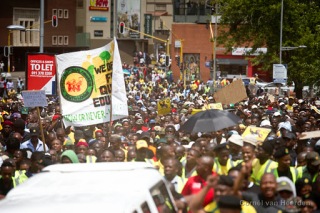 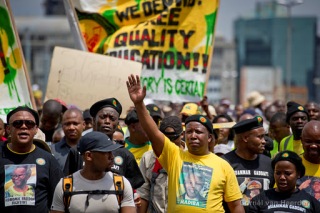 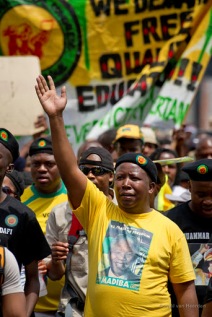 ANC Youth League members had completed the first stage of their three-stage march for economic freedom by 3.30pm on Thursday.

Around 5000 marchers handed over a memorandum to the Chamber of Mines in the Johannesburg CBD in the first stage.
They had set off from Beyers Naude Square at noon, four hours later than planned due to transport problems.
Led by ANC Youth League president Julius Malema and a formation of police cars, four Casspirs and a water cannon, the group sang revolutionary songs and danced through the CBD.
Chamber of Mines CEO Bheki Sibiya accepted the memorandum after ANCYL deputy president Ronald Lamola read out the grievances contained in it.
Sibiya told reporters the chamber would apply its mind to the content of a memorandum.
“We understand that the level of unemployment is too high and we agree with the youth league that the level of poverty is too high,” he said.
“We will distribute it (memorandum) to our 55 members.”
The league was demanding the nationalisation of mines and the introduction of probation programmes within companies to give youth skills in mining.
The memorandum calls for better wages for mine workers and the active involvement of mining companies in the development of the industry.
After spending 20 minutes at the chamber’s offices, marchers headed to the next planned stage of the march, the Johannesburg Stock Exchange in Sandton.
Malema urged supporters to exercise maximum discipline throughout their “long walk to economic freedom”.
“Take your time and walk. We have the whole day and night. You must not run,” he said.
“We (the leadership) are coming to march with you because we are all from poor backgrounds.”
However, the marchers’ spirits started flagging just after 2pm as they entered Oxford Road in Killarney.
They stopped to wait for a water tanker as several people were dehydrated and at least five people had fainted.
The marchers were no longer singing and dancing, but shuffling along in the heat.
Some of the placards carried by marchers read: “The real freedom is economic not parliamentary. Free my people.”
Another with slain Libyan leader Muammar Gaddafi’s picture read: “We salute anti-imperialist martyr Gaddafi”.
Others read: “90 percent of the economy is still in the hands of the minority” and “Malema we must stand by you through thick and thin.”
Juice and water was handed out as marchers reached the Rosebank Zone, and supporters resumed singing and dancing.
Gauteng police spokesman Lt-Col Lungelo Dlamini said the march had been peaceful so far.
“There have been no disruptions since the march started. Everything is peaceful.”
Police and a private security company hired by the youth league were monitoring the situation.
Meanwhile, the Johannesburg Stock Exchange in Gwen Lane in Sandton was prepared with railing gates wrapped in black plastic sealing off its underground parking entrances.
Police in bakkies waited at the end of Gwen Lane, which was blocked at one end.
Once marchers had handed over a memorandum to the JSE, the plan was for them to march to Pretoria where a night vigil was to be held prior to a march on the Union Buildings on Friday.
The last mass action by ANCYL members happened outside Luthuli House in central Johannesburg at the start of Malema’s disciplinary hearing last month.
Youth league members threw rocks, bottles and bricks at journalists and police, and burnt ANC flags and t-shirts with pictures of President Jacob Zuma printed on them.
The march was taking place a day after testimony in Malema’s disciplinary hearing was concluded. He and several co-leaders face charges of bringing the ruling party into disrepute.
Earlier, the SABC reported that members of the Congress of SA Students (Cosas) had forced pupils from Alexandra and Soweto schools to join the march. – Sapa