PHOTOGRAPHER OF THE YEAR 2012

JOURNALIST OF THE YEAR 2012

South Africa’s National Press Club on 12 April held its annual Journalist of the Year Awards ceremony at the CSIR in Pretoria. What an honour to have been named the “Photographer of the Year” for my work done in 2012. But it wasn’t over yet: By the end of the evening, the overall “Journalist of the Year” (chosen out of the winners in the print and broadcast) was announced. I was in utter shock when my name was called out – the first time a photojournalist was named the overall winner!

For the “Photographer of the Year” award, we had to enter a portfolio of 5 images, taken during 2012.

After I won, many people requested to see my portfolio – so here it is:

In 2012 young burn victim Pippie Kruger captured the hearts of many South Africans and hers was one of the major news stories of the year.

Pippie got third degree burn wounds over 80% of her body after a bottle of fire lighting-gel exploded next to a braai/barbeque. She was the first South African ever to receive a revolutionary skin graft transplant, in which her skin was cloned in Boston in the USA.

I covered Pippie’s whole story, from the operation to where she is now at home busy with rehabilitation. This picture was taken as she was rolled into the operating theatre before the skin graft.

I waited for little Pippie to be exactly under one of the lights so that I can have her perfectly lit and everyone else a little darker – I captured both her parents, surgeons and then that haunting look of fear in her little eyes. As one can expect I had to do a lot to get this image – Hospitals are difficult place to shoot and we had to scrub in to be able to get in theatre.

Professor Philip Tobias was an internationally known paleoanthropologist with a long and prosperous career. His funeral was attended by people like former South African president Thabo Mbeki and Minister Naledi Pandor.

It is always difficult to cover a funeral. I try to approach it with utmost respect and I try not to intrude. To me, this picture told the whole story of respect, somberness and this beautiful Jewish Cemetery.

I used my wide angle lens to get most of the mourners and stood at the back as to not intrude. I also used a silent-shutter feature on the camera. I just knew I had to get this shot to honor Prof. Tobias and tell his story.

Hot Air balloons usually take off before the sun rises when it is cold and there is not a lot of wind. We were there very early to get them while they were getting prepared.

For this shot, I used a fish eye lens. I wanted to get a different kind of shot and waited for the balloon to take off. As soon as it did, I ran under it and shot straight up to get the whole horizon in while still having the balloon – big and colorful. Also an added bonus was the flames in the balloon as the pilot used it to take off. I have never seen an image like this before and it has great impact as it immediately pulls the reader in with the interesting effects and colors. It was very hard work getting this shot.

In South Africa service delivery protests are very common and it is always a challenge to photograph it in a way that is original and new. I was in Ratanda the whole day and the protesters were very anti-media.

It took quite a while to gain the acceptance of the crowd. At dusk, things were heating up again and the tension was rising. I was busy talking to the protesters when the police starting spraying us with a water cannon and shooting teargas. Everybody was running away, but I ducked behind a dustbin and photographed the people with the water spraying on them.

Minutes earlier I decided that I want this kind of shot – it was dark and this way I can drop my shutter a little to get some nice movement. It is very difficult to do this shot, as your subject needs to be sharp (like the guy in the middle) you have to match his speed and movement exactly. 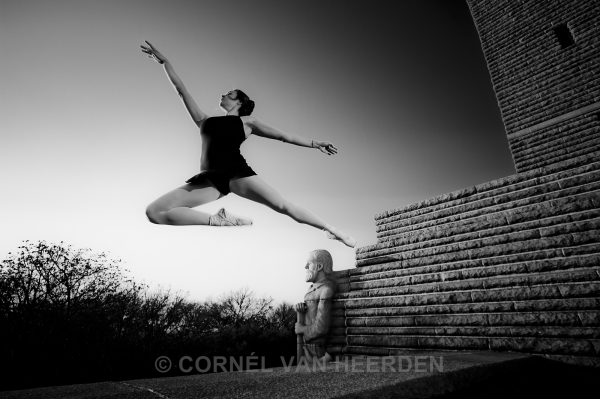 “Before Sunrise” is a group of adult dancers, traceurs and photographers that collaborate to have photos and videos taken before dawn at different spots in and around Pretoria.

It is mostly well-known locations such as monuments etc. and in this case they went to the Voortrekker Monument in Pretoria.

It was extremely cold as it was in August and we needed to be there before sunrise, so up early and very cold… but it was totally worth it. What a great experience.

In this photo I wanted to capture the beauty and grace of the dancer and contrast it to the stately, rough, old monument. I used an off-camera flash on a stand to the right of the camera to balance the light of the sun rising on the left of the dancer. I also used a wide angle lens to play with perspective.